Anxious when eating in front of someone? Hypnotherapy can help!

Anxiety when eating out? Hypnotherapy could help you.

Every month or so I get a new client who has a fear of eating in restaurants. Sometimes its more acute with family and friends, sometimes with new dates or lovers. Restaurants in Reading, Oxford, London, Thame and Wallingford must be losing a fortune. The good news is that hypnotherapy has helped plenty of such people and if you’re suffering the same symptoms then perhaps it could help you too. 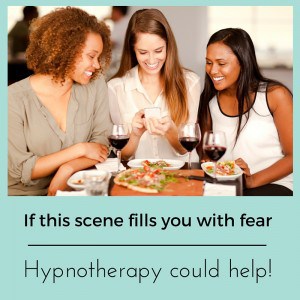 You know how it goes: you’re getting ready for that first date and you’re feeling that mix of nerves and excitement.  You have a shower, wash your hair, get dressed all nicely, to impress, and head off out.

An amazing six out of ten women report feeling varying degrees of anxiety when eating with a partner. Men, too, can feel this anxiety. Why? What’s going on?

It needn’t be a fear of eating out. Sometimes I meet people who have those same feelings of anxiety, nausea and a loss of appetite when they’re simply at home, eating with family and friends.

Does any of this sound familiar? If so then you;re not alone. It’s a more common fear than is commonly believed.

A fear of eating in public can sometimes be a sign of an eating disorder. This isn’t always or often the case, however. It’s more commonly a sign of social anxiety.

At the time of updating this post we’re still in the throes of Covid 19. You may have spent the past nine months feeling completely free of this fear. However, the vaccines are now arriving and the end is in sight. Perhaps now would be a good time to resolve this fear before we’re all out and about once more. You wouldn’t want to miss out on the joys of meeting up with your friends again, simply because of a fear like this!

Eating in company can seem a social minefield 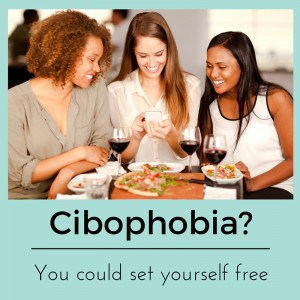 Eating is more fraught with social signals than we sometimes realise. Do you hold the fork correctly? Are you using the right spoon? Napkin or serviette? In the collar or on the lap?

White wine with fish or red? A whole system of etiquette has been devised in order to separate the plebs from the elites. Do you know how to pretend to belong to the other side of the divide?

Am I eating too much, too fast, too noisily? Am I going to spill this all the way down myself and look stupid?

Will I have anything to say? Will he think I’m boring or stupid? The anxiety of going on that date becomes associated with food. Eating in public becomes a problem in itself. It’s all just best avoided. Stay at home!

Of course, this scenario could be repeated in a work environment. Christmas meal with the boss? Nightmare! Meeting the prospective parents in law for lunch? No way!

Some people develop the fear because family members would pressurise them to eat seemingly impossible plates of food. Food is love and boys need lots of it in order to grow big and strong, don;t they? I’ve met more than one person who was so ‘fed up’ of being forced, for fear of disapproval, to clear their plate that the very idea of eating with family evoked anxious responses.

Perhaps there’s a phobia of food itself – cibophobia – in play. Fear of eating strange foods can render social occasions a true ordeal. Perhaps it’s simply easier to avoid restaurants and the like altogether.

Perhaps the fear has another unconscious motive in mind

What’s more, fear of eating in company could also be a fantastic way of avoiding company altogether. It’s amazing how people unconsciously develop problems in one area of life in order to avoid another one elsewhere.

Some people develop weight issues so as to avoid romantic relationships and the emotional risks they bring. Panic attacks can be used to keep complete control over a family and its movements.

Migraines can be unconsciously summoned into being in order to avoid a hated job, an OFSTED inspection or a disciplinary. People can learn to be afraid of eating in public in order to stay at home, alone. Anxieties can be sneaky like that.

The people who see me for a fear of eating in public places are, more often than not, afraid of dating and risking their hearts to a stranger. Dating is scary and such fears save you from having to risk being hurt.

Hypnotherapy could help you to identify the source of this fear, work through it and emerge feeling more confident, not only in the previously feared situations but also in your own self as a person.

Wouldn’t that be worth the investment of a little time, money and effort?

Whatever the issue may be, hypnotherapy in the hands of a skilled and ethical hypnotherapist can help you resolve it.

You really can learn to enjoy eating in company.

You could learn to build enough self-confidence, self-esteem and self-acceptance to realise that you’re a perfectly good catch and so lose the fear of dating. Dating will always cause a nervous response, of course it will. However, it’s all a matter of proportion. Your date, after all, will be as nervous as you and so there’s really no need to doubt yourself quite so much,

You can learn to let go of social anxiety and to resolve the reasons behind it. After all, you have absolutely no reason to fear company. You’re perfectly good enough and you wouldn’t be going unless somebody else thought so too.