Hypnotherapy for scrupulosity could help you to overcome that fear of moral or religious shortcomings.

I’m presently using hypnotherapy in Reading and Oxford to help two clients overcome scrupulosity. I understand what a terrible affliction it can be. It has certainly had an enormously negative effect upon these poor people.  The good news, however, is that it can be beaten. If you’re here because you’re presently suffering from religious or moral OCD, aka ‘scrupulosity’, then take courage. You can learn to beat it and hypnotherapy could help you.

OCD is a painful experience because thoughts and rituals are imposed upon the sufferer’s being when they have absolutely nothing to do with his or her normal self. At the time of updating this page we’re emerging from the misery of a global pandemic and I have witnessed all forms of OCD (along with every other form of mental health disorder) rising alarmingly. If you’re here looking for hypnotherapy for scrupulosity then please be assured that you’re very far from being alone.

I also offer hypnotherapy online for scrupulosity, using vsee, zoom or whatsap. Please get in touch for more details as to how this works. 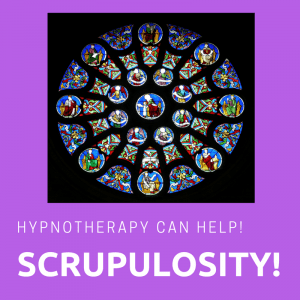 Obsessive thoughts that you’re a uniquely bad person, that a single past action cannot adequately be atoned for, that God is disgusted with you and so forth are common examples of what it is to suffer from scrupulosity. These thoughts and actions are patently absurd and the sufferer usually knows this whilst at the same time finding them seemingly impossible to shake. Scrupulosity is often thought of as being religious OCD.

Scrupulosity, however,  is different to the more common or garden variants of OCD because it springs from the sufferer’s existing belief system. If we believe in a God then we believe in the concept of sin.

If we believe in Christianity then we believe that all are sinful and that those who cannot control themselves in the face of temptation will one day face God and have to account for their actions.

Scrupulosity is not an officially recognised term in psychiatric circles. It is recognised as being akin to a form of OCD and is treated accordingly.

I find that treating it in much the same way as OCD is the most effective approach. My own knowledge of religion has also proven to be a helpful part of the therapy.

Isn’t the concept of sin central to religion? 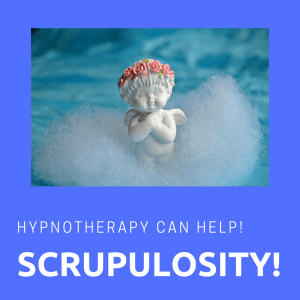 Yes, within reason. The religious do indeed have an inbuilt awareness of sin, human weakness and evil and are always on guard against its appearance in their own selves.

The holy books talk a great deal about religious law and of God’s demands upon us. Explaining what we must do to live correctly and of which behaviours to avoid is a central part of every religion.

Every religion recognises the difficulty of living well. Man is recognised as being inherently sinful and we are charged with striving against such temptations.

We are supposed to feel bad about our sins.

The problem with the ‘scrupulous’, however, is, that they take this to an extreme and leave themselves unable to find peace and comfort in God’s love, compassion and forgiveness. We’re supposed to feel regret. We then confess, repent and are forgiven.

We are supposed to take comfort in God’s forgiveness and this is where the scrupulous fail. They imagine sin where there is none and fail to accept imperfection in their own natures. God’s forgiveness fails to be satisfying. Indeed, such people will often imagine themselves too evil to be forgiven.

OCD and Scrupulosity / religious OCD share their origins in anxiety. OCD, in fact, is an anxiety based ‘disorder’ and anxiety can take many forms. Both conditions are likely to be accompanied by other forms of anxiety, depression and suchlike.

Does your hypnotherapist understand the difference between cause and symptom?

It’s vital that you choose a therapist who understands this. If you merely focus on the symptoms of scrupulosity then the underlying anxiety will either regroup and cause a resurgence or else mutate into a different means of expression. Your anxieties may centre around thoughts of sin or morality and yet the cause of these thoughts will lie deeper. It’s often the case that the sufferer of scrupulosity will have a tendency to anxiety which stretches back into childhood. At some point the anxiety focused itself upon thoughts of sin and morality and scrupulosity is born.

We will need to work on both symptoms and cause. Otherwise the danger is that scrupulosity returns at a later date or simply transforms into other forms of mental ill health.

You don’t need to face a lifetime of doubt, rituals preventative measures and avoidance. Hypnotherapy could help you. You just need to deal with the whole problem, root and branch.

So what precisely is ‘scrupulosity?

Scrupulosity is where this awareness of our own fallibility takes over to a disabling extent. It is taking the concept of sin and penitence and rendering them an extreme.

Scrupulosity is where life becomes a series of obsessive thoughts and rituals designed to guard against sin, punish the self for sin and where self-condemnation becomes an eternal whirl of crippling anxiety and fear.

It prevents people from enjoying their lives and robs them of the ability to focus on the merciful, loving, caring side of their god.

Hypnotherapy could help to set you free from this needlessly self-inflicted torture. Others have done it and so can you. Give me a call. I’ll be glad to help.

Does it have to be all about religion?

Nope, not at all. There is also a secular (religion-free) version of scrupulosity. This is where the person afflicted by the problem imagines themselves to be uniquely bad. They may spend their lives plagued by thoughts such as:

“Did I say anything wrong when I met Jim last night?”

“I hope I didn’t upset anybody?”

It is generally combined with a total lack of self-esteem and a sense of worthlessness. It can even lead to people imagining that they may have been that person who committed crime A,B or C.

Such people are often behind those strange stories of people confessing to crimes they hadn’t committed. They begin to wonder and their imaginations fill in the gaps in order to create false memories.

What a dreadful problem to be living with. Fortunately there is something you can do about it.

Why is it called ‘Scrupulosity?’

A ‘scrupulum’ is the Latin word for ‘sharp stone’. The idea is that this stone represents the stabbing pain felt in one’s own conscience. Those who suffer from this condition constantly feel as if they are failing to live up to their moral or ethical code.

It doesn’t have to be this way. Help is available. If you or a loved one are suffering in this manner then you can learn to let go of your scrupulosity. Good people don’t need to punish themselves and you are, I can assure you, a good person. Only the good feel guilt and regret, after all!

It’s a constant sense of dread, doom and fear!

Others may look at their younger selves and feel forever tainted by those wrongs most of us can learn from, put aside and put down to youthful ignorance: lies, petty thefts or suchlike. People with scrupulosity live in constant fear of sinning further, blaspheming, offending God and some can dwell on images of hell, Satan, demons or similar.

Others worry that their own sins will result in those they love being sent to Hell. No amount of repentance will be enough. Their very existence is an affront to God.

The History of Scrupulosity

Centuries before any real understanding of mental health developed, Priests would notice how some of their parishioners failed to gain any long lasting peace from confession and absolution. They would return time after time to confess the very same sins.

Ignatius Loyola, founder of the Jesuits, also showed some signs of scrupulosity.

He wrote that if he happened to tread on two straws which had happened to fall in a cross shape then he would be overcome with fear of his sin. Given that he lived in the 17th century, treading on straw would have been a daily occurrence and his fear of this sin would have been quite a torture to him.

So what can be done?

Neither are you likely to be the only one who can’t find a way out. Scrupulosity can be beaten. If you’re here because you suffer from this condition then you can do it. If you live in or around Reading, Oxford, Thame or Wallingford (Berkshire and Oxfordshire UK) then you can do it and I’ll be glad to help you.

Hypnotherapy, if used sensitively and integratively, could help you to find your salvation!

Hypnotherapy is a powerful therapy and when combined with other approaches can offer you the solution.

Cognitive approaches can be used to help you to defeat this condition with your reason.

God is a forgiving God. The Bible says so. The Qur’an says so. The Torah, The Talmud and every other holy book says so.

If you can find a therapist with a knowledge of religion, who won’t challenge your faith but who will respectfully help you to make a few tweaks to your interpretation of it, then you can be convinced that there is no rational basis to your fear.

Mindfulness and self-hypnosis could help you to overcome the anxieties which surround daily life with scrupulosity. These same methods could help with a behavioural element to treatment which would help you to face down your fears one step at a time.

Skillful therapy could set you free!

The techniques thus far described could help you to not only defeat your fear in your mind, but also to pick apart the thoughts, rituals and actions which you would otherwise be tempted to continue in search of temporary relief.

Carefully structured and monitored exposure therapy will help you to break apart this self-sustaining web of ritual and thought.

Hypnotherapy is a turbo-charger to all other forms of therapy

The cause or underlying beliefs need to be discovered and worked through. Hypnotherapy could help you to do this. Hypnotherapy accesses resources long since forgotten, resources we never knew we had and calls them into service.

Hypnotherapy can reinforce, pre-empt and strengthen all of the other approaches discussed above. One counsellor told me that she wished to learn hypnotherapy because it ‘turbo-charges’ all other therapies. She was right. It does.

You can beat scrupulosity and if you’d like me to then I’d be glad to help. With a good understanding of religious belief and a respect for its adherents , four years of training and UKPC accreditation, I could be the hypnotherapist to help you through.

Terrific article! This is the kind of information that are meant to be shared around the internet. Shame on Google for not positioning this post upper! Thanks =)