Doing up your laces is tough work! 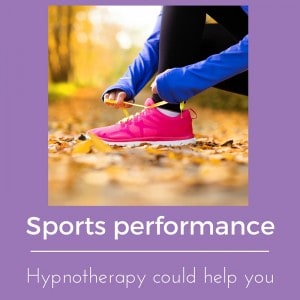 It doesn’t have to be that way. I’ve worked with professional footballers from Reading Football Club, equestrians, golfers, athletes and many more besides. All have found that hypnotherapy can help to remove those blocks which hold you back.

Sometimes it’s a period of difficulty which sets off the vicious circle of negative thinking and poor performance. Perhaps you were feeling a bit ill, had a really bad game and were heavily criticised by a coach or manager. That can be enough to dent confidence in anybody.

Perhaps you’ve had an injury and are finding it hard to get back to peak form. I’ve worked with many people who suffered an injury and the fear of a repeat injury held them back from allowing themselves to truly let go in their sport. Performance suffers, confidence weakens and that same vicious circle emerges.

Athletes need to treat the fitness of their minds as seriously as they look after their bodies. The divide between them is an entirely artificial construct in any case.

OK, so what is ‘flow’ and why should you care?

Please humour me for a minute. Put on a lace-up shoe and obey the following instructions to the letter. Forget what you know and follow these directions as if you’d never done a shoe lace before.