Does your anxiety have a personality, a character?

Piglet personifies anxiety. pooh spends a great deal of his time in calming his panic attacks and general anxiety disorder.

Giving human emotions a face is hardly anything new. Artists have been doing it for hundreds of years. One, Toby Allen has taken to drawing psychological problems as creatures, giving each of them a personality and a history.

He began doing this in order to help himself with his own difficulties and has now produced a whole range of postcards and other materials which are aimed at helping people to establish greater control over their problems.

I don’t know if Toby ever went to see a hypnotherapist but if he had come to see me then he would know that this is something I’ve been doing with my clients for a long time.

Personifying anxiety robs it of its power! 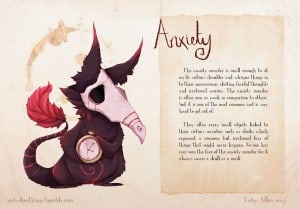 I don’t draw, I’m no good at it, but I do encourage my clients to picture their difficulties as a person or creature. I do have them give their anxieties or depression a name,  a character, a past.

Doing this helps establish a different relationship between my client and his or her problem. Furthermore, giving a problem a face helps to establish the possibility of change.

If anxiety is a nameless force then it’s harder to adapt than when it becomes a creature with a name, a personality and when it’s understood that this creature is actually trying to help.

Negotiation becomes possible. Change becomes visible. The balance of power shifts and people begin to leave their problems behind them.

Of course, it’s not quite as simple as all that but it’s testament to the enormous power of imagination. When I was a kid I watched Jaws on TV and remember being physically scared of sitting on the toilet for a while afterwards… Imagination trumps reason every time. People and their imaginations can cause problems and people can use their imaginations as a part of the solution too. 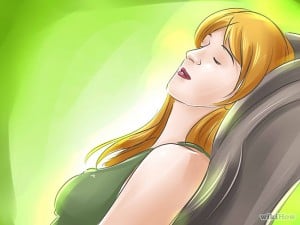 Hypnotherapy can help your anxiety

Hypnotherapy bypasses the critical factor. It helps people to free the power of their minds to find new and innovative ways of resolving their issues.

Long term causes of anxiety can be resolved, once and for all. How does that sound? Wouldn’t you like to be freed, for good, from things which have bothered you for years and possibly even decades?

I recently saw a boy who saw a face in his bedroom window. It was a mere reflection of light and rain but it terrified him and in that instant he developed a fear of going to bed. His imagination had administered a powerful jolt and his phobia was formed in an instant.

When, under hypnosis, I had that boy imagine a friendly face at the window, with a name and a shared passion for pro-wrestling the phobia was far easier to dismantle.

If he can do it, you can too. He’s just one of hundreds of people for whom hypnotherapy has been a liberation. All over Berkshire, Oxfordshire and London there are people living happy and fulfilled lives because their anxiety has been lifted from their shoulders.

If you’d like to discuss hypnotherapy in more detail then please do give me a call. I offer hypnotherapy in Reading, Oxford, London, Wallingford and Thame so cover great swathes of Berkshire and Oxfordshire. If you’re local to any of these areas (or would like to work via skype – like media) then I’d be glad to talk with you. You can call me on 07786 123736, 01183 280284 or 01865 600970. Alternatively, simply email me on paul@resolvedhypnotherapy.co.uk

Find out more about my work in Thame, here