Why are women twice as likely as men to experience anxiety?

Are women really twice as anxious or is the truth a little more complex?

Anxiety! What a vile problem to face on  a daily basis. Everybody experiences a dose of it from time to time but it’s generally situational and concerns something temporary such as a date, a job interview or a near miss in a car. To suffer it daily, however, or all the time is a terrible affliction. I know this well. I once had a short spell of general anxiety and I meet clients who have suffered with it for years. 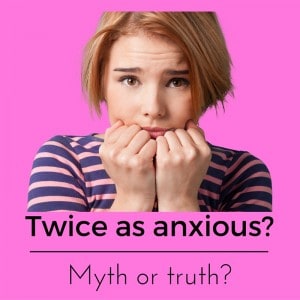 The BBC reported, today, that women are twice as likely to be anxious as men and that anxiety is an underestimated problem in modern mental health.

This is great news! Firstly, it’s great that anxiety is starting to be taken more seriously as an issue and if it’s really true that women are more likely to suffer from the problem then perhaps, just perhaps, something may be done about it.

Would you like to do something about your anxiety? If so, read on!

Perhaps women who find themselves suffering from anxiety will now feel slightly less pressure to simply ‘man up’ and will take steps to resolve the problem instead. Here’s hoping!

Anxiety is a large and growing problem in modern society 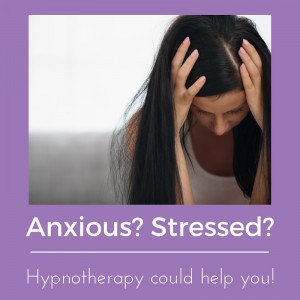 Every single day I use hypnotherapy in Reading, London, Wallingford, Oxford and Thame to help people overcome the curse of anxiety. Anxiety lies behind a whole host of further problems such as depression, OCD, IBS, tinnitus and much, much more.

As lives get faster and as life feels more precarious more and more people seem to fall victim to those sweaty palms, butterflies, feelings of nausea and an inability to focus, concentrate and perform.

Perhaps women have a harder time than men because they are often expected to work during the day whilst still enduring the majority of household chores and childcare upon reaching home.

Perhaps women are more likely to experience traumas in childhood (sexual abuse, for example) or domestic abuse in adulthood which test their emotional resilience to destruction.

Is it biology, society, cultural conditioning or a combination of these factors and more?

Doctors commonly suggest that women have a different brain chemistry than men, rendering them more prone to anxiety and its disorders. Some suggest it’s a matter of having fewer serotonin receptors, for example.

This, however, would fail to explain why anxiety among both sexes is on the rise.

Others believe that patriachy stands in the way of a woman’s success and that this lies behind their greater propensity to anxiety.

Women are often commonly believed to worry more, to ruminate more upon problems whereas men are said to have a more ‘f*ck it’ attitude’ to life’s tribulations.

Others believe that women suffer from vicarious stress. This means that stress and anxiety in friends is ‘contagious’ and spreads among friendship groups. Perhaps, on the other hand, the frantic nature of modern life means that women are less able to maintain social bonds (these reportedly being more central to a woman’s emotional well-being than to men), thus removing one of the pillars of female resilience.

Are they really any more anxious anyway?

Women are generally more prepared to admit to health problems of any type. Doctors readily concede that men are less prepared to consult doctors for any problem and that mental health issues appear to many men as being signs of ‘weakness’ and thus go under-reported.

Men are also believed to resort to coping strategies which disguise anxiety. Alcohol abuse, gambling, dangerous behaviours and suicide are more common among men than women.

Is it really true that women are more prone to mental health issues than men?

The jury is still out on all of these questions. Perhaps human beings are so infinitely variable that there will never be a single, clear-cut answer. Perhaps, if we treat everybody as a unique individual, we don;t need one anyway.

Whatever the truth, hypnotherapy could help you

Hypnotherapy has the advantage over practically every other therapy in that one of its core benefits is to teach people how to relax. Hypnotherapy, when allied to mindful approaches, can help people to process emotions more effectively so that anxiety cannot build up unnoticed. Hypnotherapy, when allied to counselling skills, is as effective as any other therapy (often more so – when utilised by a skilled practitioner) as getting to the bottom of the problem and treating it at source.

So, if you’re living in or around Reading, London, Oxford, Wallingford or Thame and would like to resolve that anxiety once and for all, please do consider getting in touch. Whether you’re male or female, anxiety is a horrible condition to suffer and you needn’t suffer anymore.